Some brief information about the MASN-conferences 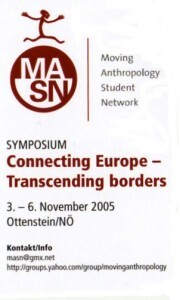 Alongside virtual communication via the world wide web, international MASN-conferences have been organised in Austria in 2005, Croatia in 2006, Poland and Germany in 2007, in Italy and Slovenia in 2008, in Poland and Ireland in 2010 and in Croatia 2011. These meetings have attracted hundreds of participants from countries all around the world. The last conference took place in Kautzen, Lower Austria, from June 6.-10., 2012.

The conferences are intended as a platform, giving us the opportunity to share different viewpoints and scientific approaches applied by anthropology students with diverse academic, educational and contextual backgrounds. By combining varying approaches and traditions of anthropological education in those participating countries, we hope to shed a better light on the many fields and issues concerning anthropology.

What are the current (regional and topical) areas of investigation among young anthropologists? In which ways do our scientific foci and methodological instruments differ from each other? What can be said and commented about those acquired skills and perspectives applied in different countries to their use in future fields of research, as well as on the job-market?

The conferences are usually mainly organized by students from one country, often coming from several universities, and go from 3-5 days with the number of participants ranging from ca. 35 to near 150. In the past, each conference has had a general theme or title, but often included several specific daily topics, e.g. “migration”, “body” or “anthropology of crises”. The organizers of conference can choose these topics freely, but are encouraged to dedicate at least one or two day topics to a theme that has been discussed much inside the MASN-community, or which has been chosen by the participants of one of the former conferences.

During special “networksessions” throughout or at the end of the conference, all participants are invited to reflect on the on-going meeting, take part in the structural evolvement of the network and decide on the future expansion of the organisation in basis-democratically way, i.e. there is no hierarchy involved.